About why I say Punk started in France?
LoL
Thank you for taking my viewpoint serious. Over here in Holland, I weep in 4 languages at least, when no one understands me, while on this forum people have respect. Just for the record, I don't speak French, the 4 languages I weep in are Dutch, English, German and Flemish.

Actually, MES is more right than me here. And when I say "Punk started in France", I mean, "The last country where Punk would start EVER, would be in France!". The Barthelomeus Massacre happened in 1572.
https://en.wikipedia.org/wiki/St._Barth ... y_massacre

The people you can see slaughtered at this painting, are the Huguenots.
They where slaughtered all over France, the scene on this painting portrays the political environment some what.
Off course, the painter was a lot less aware of the political backgrounds than I was, because the nobility expression will be hard to understand, without any longhorn breed visible that ordered the massacre.

I've checked the pictures on the Wiki story, only one picture there has the Longhorn breed portrayed, that's this one:

I haven't read all the text there, but if folks here want to know the real history, please try to find other sources than Wikipedia, because Wikipedia is not very reliable, can only be used for years. Actually, the pictures there should portray Longhorn breed and hip priests, sometimes a noble, not the way it is presented now. The picture choice on the Wikipedia page tries to indoctrinate the viewer into Socialism, an indoctrination problem that I addressed in an earlier post in this thread.
Don't want to get to much off topic here, I'll continue...

Not all Huguenots where murdered, they would flee to protestant parts of Europe.
In order to understand the conviction of the Huguenots, certain knowledge about the publications by John Calvin should be understood, not going to explain them here, but it is important, because these convictions resulted in the a victory for Reformation, where many songs by The Fall give a great insight in. Currently I have an opinion like, better folks go read The Fall's lyrics to understand Reformation, but when John Calvin's professorship is let loose on The Fall lyrics, more understanding off the lyrics can be achieved. For instance, I checked the song The New Puritan, and would come to the conclusion, this is the same content as the song Reformation has, but in other words. Facts are described by MES, and I don't know how he achieves in that. I've been pondering on it like, is it some kinda withcraft, is he working for MI5, or is he really a New Puritan, who understands Reformation as a real man? I suspect the latter, and explain is as, must be and supported by other Brits that understand the same thing. And how important it is. Because, the Huguenots, Kathars, Vandals, Schismatics, Manicheans, Jansenists and many other where often accused of Witchcraft, while this was not the case. If Hip Priests say: "WE MUST MURDER THE HUGUENOTS, BECAUSE THEY ARE HONEST PEOPLE AND GOD PROTECTS THEM!" That will work not very well. Therefor, the protection by The Lord is defined as Witchcraft by the papist priests, in order to make folks that read an understand the Bible out as Heretics. As was done to William Tyndale. 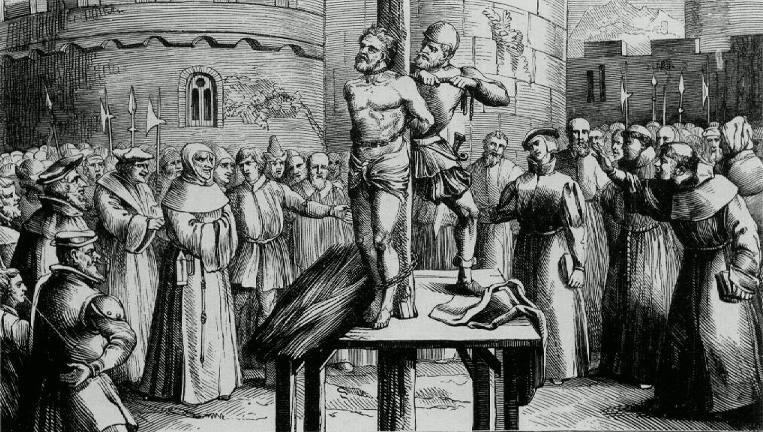 Just check the popularity of the priests in this picture, in order to understand why I quote The Fall lyrics for a better description of real occurrences in History. Hip priests, and falsely accused Bible translator William Tyndale. This happened in Vilvoorde Belgium, and the espionage to grab William Tyndale was done by Saint Sir Thomas More, who was correctly beheaded for high treason, but later was declared as an official saint in the Roman Catholic Church.
http://www.spirituallysmart.com/redmasspics.html

Can make a long post now on the role of William Tyndale in British Puritanism, but hope folks understand, that If have to explain British Reformation to the British as a Dutchman, you are asking a thing to explain, that you should better understand yourselves. Currently explaining the French connection.

1572.
Den Brielle, a small village bordering Rotterdam, was taken by the Wild Beggars of the Sea, also known from British sources as, the Seabeggers. After that, Revolution started in Harlem, the first successful revolution in Holland since all revolutionaries where massacred a century earlier, and was prepared by Hague Preachers. A Hague was a line of armed men surrounding a preacher during his talk, but in this time journalism would maybe a better word than preaching, because what today is named preaching is mere popery under cover.

When the Catholics wanted to take Britain, Scandinavia and slaughter these heretics because would read the Bible all over Europe, they would build an Armada in Spain, that was taken down by an alliance of States in the North. British sources on that say, that the British took down the Armada's, Dutch sources say it was the Dutch, so it must have been the Danish.

The word "Seabeggar" is a very wrong translation of a Dutch word, that can not be translated easy. The word "Geus", or "Watergeus". Mostly pirates given a legal states by the first William of Orange. But also building workers, Huguenots, Jews, and any one that had fled papist persecution in Europe ready to defend. This way an army was build from scratch, that than later became the Dutch republic after victory was made. Geus is derived from a French word, "les Geuix", that is French for beggar in an effort to humiliate such people. This word however was used to address Dutch Nobility. This was done by the hip priest who was popular at the court of Margaretha von Parma, from the Italian bribed Bloodlines, that controlled Europe. The exact phrase in French she used was:
N'ayez pas peur Madame, ce ne sont que des gueux

The Huguenots that would flee to the Dutch Republic, where made into the army to free the country from popery.
They where named, Bosgeuzen, or translated into English, Forest Beggars, and would survive there.
After this country was made free from popery, England was still having battles to defend themselves against it. The law in these times was such, that nobility was needed to make a seat of a King legal, so one of les Geux, the Dutch Punx as I see it, was made into king William of Orange, where this Album by The fall Kurious Orange is about.

Please don't accuse me of history here, because in the time William of Orange would become King of England, the Calvinistic insights in the Dutch Republic where already so much damaged by infiltration attacks by under cover papist priests, murders, catholic preaching under other names, that from a realistic standpoint, King William of Orange was a lot less protestant than the beggar looking nobility from the 1500's. And just to make it clear even further, I pasted an image having the text "The pope's dream - a Roman Catholic America", that drawing is from the 1800's from an American Newspaper, it was made just before the (Imported Irish&Italian) papists take over of America. Abraham Lincoln was murdered by the Roman Catholics, but in the 20th century, the papists have become so powerful, that they achieved in keeping that secret. The paintings of William of Orange is a fashion that makes it hard to feel any pride about it, although I understand he really helped Britain against a Roman Catholic take-over for a while. For a high price though, but this would become a new story again.

Punk in Britain dies before the 20th century started out?
My argument there is, I found American Punk made at the beginning of the 21st century, although it was not music, it was an actor, who portrayed the picture I posted before of the popes dream, that he tried to prevent: Bill the Butcher
Christian lord guide my hand against your roman popery
Not my decision to name that Punk or not, any ways, Russian Punk is the best Punk these days any ways.
Ансамбль Христа Спасителя и Мать Сыра Земля
Kurious Oranj (from Holland)
Top

Where to start ?
Well , it seems you're thinking far far deeper into this than I was when I posed the question.
I simply mean , are at least some of The Falls song derived from or incorporating the musical style of 1970's British Punk Rock music ?
That's it.
Although I agree that in spirit , many things in the past could be described as having a punk attitude depending on the opinion . You are entitled to your interpretation of the punk attitude.
I applaud you !
But , it was intended as a purely musically intended question in relatively simple terms.

Oh and concerning Wikipedia .
I whole heartedly agree . It's a very blunt tool. Use for pub arguments only but even then beware you could be wrong.
Top

i didnt understand this at all, i cant even read it. sorry. i got about as far as punk started in France and gave up.

sorry. i cant concentrate. um. (divvey prescribes me some ritalin. thanks m8 !!)

lol. but i love the pictures.
Top

I'm dying to quote Austin Powers and call Gus a 'crazy dutch bastard '
Just cos I always wanted to say it to a Dutch person but never met one.
Has anyone ever met one ?
But he might not dig the joke.
Or he might get genuinly upset about the word 'bastard' Maybe Dutch people don't have the same humour as us English people. He might even think I really think he's mad, you know , if he doesn't get it .
So I won't.
Last edited by wankel on Fri Mar 20, 2015 5:11 am, edited 1 time in total.
Top

Not Punk, I dislike the term Punk I'd rather just have BP and AP (Before Pistols/After Pistols)
Top

You can prefer whatever you want.
The question is still valid.
Would the ace songs like 'bingo matters breakout ' or ' industrial estate' have happened without punk ?
Would they fuck, says I.
Top
Post Reply
28 posts